As her premiership came to an abrupt end yesterday, Theresa May said:

Now, I’m not a fan of Theresa May, I despair about many of the policies brought in by her government and the legacy she leaves across the country is, in my opinion, one of toxicity and division.

However, as a feminist, I also despair about the misogynistic undercurrent they runs through the way stories are written about Theresa May.

Take this front page from The Metro

The insinuation is hard to miss: that a woman needs a man to tell what to do, even  when when she holds the highest office in the land, that it’s about time her husband puts his foot down and takes control of his wife. Can you imagine a similar headline about David Cameron or Tony Blair?

It brought to mind this Daily Mail front page from the week before Article 50 was triggered. 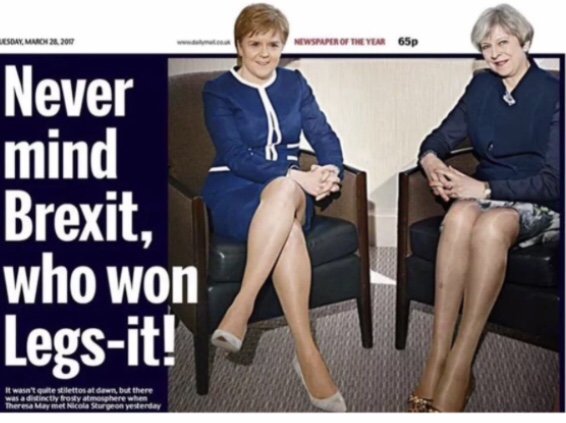 Now, I’ve had a good search and I cannot find a single article about David Cameron’s legs. Just think what could have been reported about a meeting between two female leaders who met to discuss the future of our nation. With this kind of news reporting is it any wonder so many people appear without a grasp of the complexities of our political system. Is it too much to expect some content about what they actually said at the press conference from which this phot was taken?

The other thing very notable about news stories about Theresa May’s Prime Minister is how many centre around her clothing.

For example, not long after she became PM, in 2016, The Guardian wrote a story called ‘Theresa May sidesteps question about £995 leather trousers.’ In a country used to reading about politicians sidestepping questions about offshore tax havens and dodgy business deals, this seemed a particularly weak scandal.

Similarly, the 2018 budget caused then to publish a story called ‘What is the meaning of Theresa May’s £750 ‘twofer’ coat?’

I’m sure I could go on, but you get the point. This ridiculous, trivial analysis would simply not be applied to a man holding the same office, and it’s very triviality demeans the person it is applied to. We should be debating Theresa May’s decisions, policies and principles, if for no other reason they they impact on all our lives.

But for as long as women are assessed based on their shoes, coats and marital relationships women will be put off entering politics and equality will remain out of our reach.