Broadening Children’s Political Horizons? Some may say it’s wrong but it didn’t do Michael Rosen any harm.

This week we, accompanied by our children ages 13 to 8, went to an event at Conway Hall: ‘Michael Rosen In Conversation With Daniel Hahn.’

Michael was there to speak about his early life, which he chronicles in his new memoir, ‘So, They Call You Pisher.’

He spoke about parent’s running Communist Party meetings in the front room, being involved in campaigning and his acts on anti-establishment rebellion at Oxford University. Cheekily in the question and answers section we asked for a poem and, to the delight of ourselves and everyone in the room, he recited ‘Hot Food.’

Before the book signing, which we gladly joined, Michael came over and chatted to the children and commented that he hoped “they were not bored by the political talk” to which we responded that “they are used to it.” 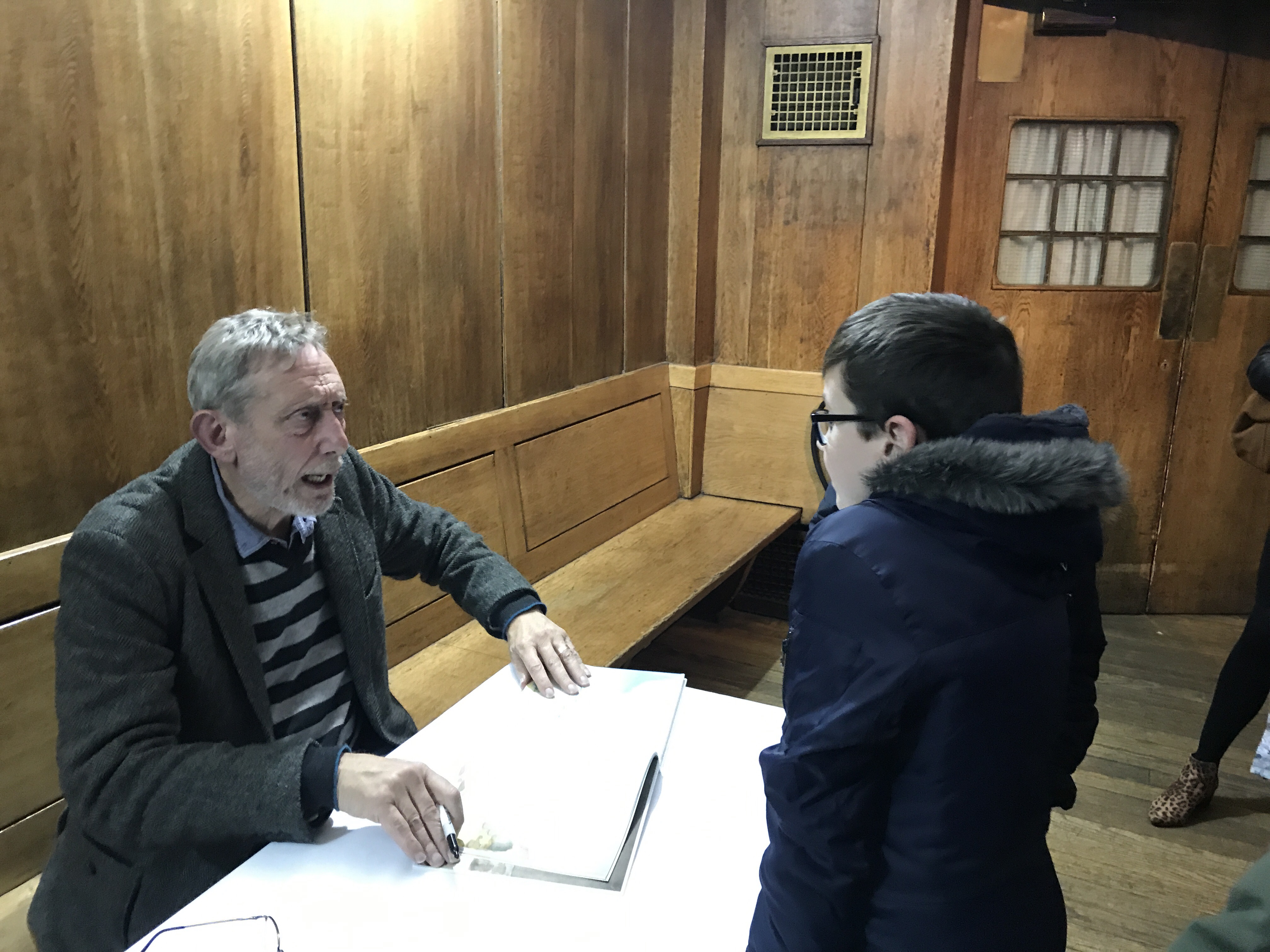 Growing up with parents who are political activists, our children are well versed in left wing arguments, being dragged to campaigning activities and listening to furious arguments.

Is this right or wrong?

Growing up listening to arguments about football, no one ever commented on that as being anything unusual; so it is interesting to see politics often portrayed as something ‘not for the interest of children.’

Michael talked about the culture he was exposed to as a child by his parents. This was felt empathetically by our children who are regularly dragged from political rally to watch an author on a book tour, or to the theatre.

Well we think there is so much to see, so many sides of life that a person should experience in order to experience the diversity of life.

Daniel Hahn himself said to Michael ” With all the education and culture you were exposed to, it must have been difficult for the school to match this” to which Michael replied that education doesn’t have to end at the classroom.

Thinking about how restrictive the curriculum has become in the last few years with the new reforms in 2014, we think that now more than ever we need to enrich the cultural lives of our children outside of school.

With the Arts being watered down in Secondary and with Primary school children spending the majority of their time working on Maths, English and Handwriting; it is worrying that their creative abilities and critical thinking wings are being clipped before they’ve even been allowed to grow.

Some may say that teaching your children the subject of politics is wrong, or that it is indoctrinating them, but I beg to differ.

Letting them hear arguments from left wing ideology can’t be a bad thing when those arguments teach our children basic human values like sharing and social responsibility.

Of course not all parents can afford to take their children to the theatre or have the time to go to events such as these. But we feel that all children deserve to have a broad education that covers the arts, politics and other subjects not normally covered in the curriculum.

So we hope that a Labour government gets elected soon and fulfils their promise of bringing back the creative arts and broadening the educational experience of all children, not just those whose parents can afford extra curricular activities.

We are, after all a nation with a strong cultural heritage.

Without an education broader than what is currently being delivered by the curriculum set out in 2014, how do we expect to produce the future Shakespeare’s, the future David Bowie’s and the future Michael Rosen’s?