“Grief is the size of love” is probably among the truest truisms.

My mum died four years ago, after two years of suffering from ovarian cancer, aged 58.

Living with the knowledge that some one you love has an illness that statistically will kill them, but trying to be positive, enjoy each day, mentally prepare yourself for the worst and to continue with everything else in your life is, what I can only call a head fuck. It’s taken me these four years to really understand what effect this has had on me. I think some sort of numbness came over me and I became obsessed, subconsciously  with finding some kind of meaning in everything.

Maybe some of this came from the conversation my mum and I had the day after tomorrow we were told her treatment wound stop and she would have about two weeks left to live.

By then we knew I had inherited the faulty brca gene which caused her ovarian cancer, giving me a 50% chance of developing the same disease and an 87% chance of breast cancer. As mother’s are prone to do, she blamed herself for my situation, but I told her, her illness has brought me the knowledge that would save my life, as I would take the opportunity given to me to have a mastectomy which would reduce my breast cancer risk to 4%. It was a beautiful conversation. I had the mastectomy and reconstruction 24 months later.

I never cried or felt sad, I felt certain that this was something that proved my mum had not died in vain: her diagnosis meant I would almost certainly avoid the same fate. I knew that would be what she wanted. At least her suffering was not in vain.

For the record, I remain thrilled with my mastectomy and reconstruction and have never had an ounce of regret. But, on reflection I do wonder if my lack of sadness or hesitation was a bit unusual.

Whilst my mum was in her final two days, at the hospice, I signed up to take part in a skydive. Again, this was a good experience and I raised a lot of money for the lovely hospice that took care of us all. Sitting around a bed waiting for someone to take their last breath is a difficult situation.

It is a strange limbo, that’s hard to describe and, I suppose is an intense ending to the experience of loving someone with a terminal illness – the mental confusion of waiting to grieve being in the periphery all the time. I was determined I was not leaving that hospice without having done something positive, in this case signing up for fundraising.

And so, I continued on a path of looking for meaning. I signed up for a post grad counselling course, I did a fire walk, me and my friend expanded our little charity activities into a bigger organisation. All of these things were fantastic. It’s also fair to say I never let myself stop for a minute.

Then there is the way I viewed myself. I was determined that I would look back on my life, secure I had lived it to the full, and with no regret about missed opportunities.

I dedicated myself to my legacy, as I saw it, to be regarded as an amazing friend.  I never stopped to think how vulnerable that left me and, maybe inevitably this has meant I’ve found myself in an altogether different grief, for friendships I thought were real, but were not.  The loss of one person in a family inevitably changes the dynamic of the rest of the family.  Trying to find a new normal for everyone is hard.

My mum was also a person with a lot of close girlfriends and so I sought to find friendships which were like surrogate family relationships.  This has led to poor judgement on my part, with my giving too much of myself to people and not seeing this was not reciprocal.

Grief, is a process that must be worked through, but for which the end can never be reached, and which inevitably changes all it touches.  I have found it hard to understand how it has affected me until this time has passed.

In memory of my lovely mum. 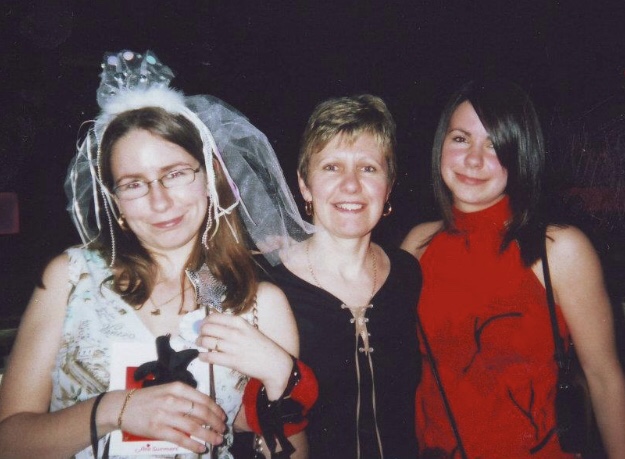 I have been living in a world of negativity, probably since David Bowie died,  not that I’m blaming him; I think he got his timing spot on.

Then Alan Rickman, then Caroline Ahern and Victoria Wood finished me off. But this isn’t about them.

There was the Brexit referendum here and Trump winning the election in the USA. I found the injustices of our selfish, immoral and heartless government so overwhelming that I felt duty-bound to start attending meetings with the opposition party to fight the good fight. I also felt compelled to put pen to paper and write about these issues for others to read about but the research necessary simply lead me down even darker paths of corruption and lies; the fire of anger and passion raged even stronger than before.

Writing wasn’t a comfort but a catalyst.

But this isn’t about that either. This isn’t even about Kim Jong Un pissing in corners or concerts where children are being bombed, or police being killed trying to save lives, or Muslims being stabbed on their way to worship. No, this all contributed to the anger churning inside, this was my view of the world and I was getting simultaneously more angry yet more numbed to these events and even bored of trying to argue against them. I was writing blogs about how rubbish things were and at the same time was totally fed up with reading the moans of other people, even when I agreed with them… But yesterday at 4.45pm, I set up a JustGiving page…

My good friend has Cancer. At age 36. Two years after beginning a new life, newlywed with her wonderful husband. This isn’t fair. I got angry some more.

She had radiotherapy, chemotherapy, she’s down for surgery but the tumours are too big, the chemo isn’t working, more aggressive chemo then… still not working.

There is a drug, Avastin which could potentially help shrink the tumours to a size that is operable. I will leave the disgusting practices of Hoffman la Roche, the company who supply this drug for another blog. A company who I have heard described as ‘not even amoral but immoral’ by a Doctor.

The upshot is, Avastin is not deemed cost effective enough to be available on the NHS. My friend will have to pay.

The drug costs £1500 a session, she needs six sessions for this round and it’s very likely she’ll need at least six further sessions.

Yesterday at 4.45pm we set up a justgiving page and we were blown away. In five hours we had raised £6,000 and by morning her first course of treatment at £9,000 was covered and now we’re collecting for the next.

What struck me, and turned my attentions away from how shitty this situation was for my friend and towards how bloody brilliant people are, were the comments left by people making donations and seeing the range of people who donated.

My friend is a teacher and we saw pupils, ex-pupils, parents of pupils donating. One a twelve year old who gave £10 towards his teacher’s treatment. Friends donated, relatives of friends, friends of relatives. One donation came from a young woman / teen whose brother’s girlfriend’s mum is a friend of my friend. She didn’t need to do that! She is a wonderful person!

People who’ve only ever come into contact with my friend via social media sent funds and one complete stranger donated £250! These people are bloody brilliant.

It wasn’t just the money either.

A man who I’ve met once contacted me to offer to DJ for free for a fundraising event, an ex-pupil now singer emailed me to offer to perform for a fundraising event, a friend started contacting local venues to put together a concert, the head of a teaching union in our area asked if he could see how they might be able to help. This was phenomenal. These people are bloody brilliant.

So stick it death.

Stick it Putin and Kim Jong Un and Theresa May.

Stick it Boris and David Davis with your crass double-D jokes.

Stick it politicians with your penny pinching, grubby little mits all over our public services.

Stick it to your pay caps and your fake pay-cap lifts.

Stick it Amazon and Starbucks and all you other skin-flint companies who dodge contributing to our children’s education and treatment of our sick through fair taxation.

Us on the ground doing the legwork; we’re going to foodbanks and we’re putting school uniforms onto credit cards and we’re not just about managing actually, but we got this. We are good people and we count and you know what? Us people, us little people, we are bloody brilliant.